Woolwich as a major cultural destination

Woolwich Works is a project by the Royal Borough of Greenwich to restore five heritage industrial buildings on the Royal Arsenal, creating a new landmark cultural hub for London. With large-scale, flexible performance and event spaces, rehearsal studios, rooms for community events and celebrations, bars and a café, the site is home to a number of local, national and internationally-renowned resident artistic companies.

Visit the Woolwich Works website to book tickets and find out more about the site.

Punchdrunk the world-renowned theatre company, is just one of the big name tenants that has made Woolwich Works its home.

Spaces for culture and businesses

Woolwich Works includes large-scale concert venues, rehearsal and studio spaces, offices, places to eat, and a base for internationally acclaimed theatre companies such as Punchdrunk. The flexible space will provide opportunities for public interaction and involvement, training and education, as well as being available for hire for weddings, parties, conferences, community meetings or events.

The new developments include:

A diverse range of tenants will be ensured by hiring 70 per cent of space to cultural organisations and local community groups at subsidised levels, and the remaining 30 per cent to commercial operators; looking for rehearsal venues, conference facilities and event space.

The site on the River Thames has long been identified as a key driver for the local economy and will provide a new foundation in the continued revival of Woolwich and the surrounding area.

It's anticipated that the new creative district will provide more than 400 local jobs in addition to new roles during construction.

The district will have a significant economic impact on Woolwich and the surrounding areas and bring benefits to the whole borough, much as the Arsenal did when it was operational.

It will help to reinforce the changing perceptions of Woolwich as a destination and increase the benefits of Crossrail. It will also support the economic and social development of Woolwich and its surrounding communities, particularly those of Plumstead, Abbey Wood and Thamesmead. 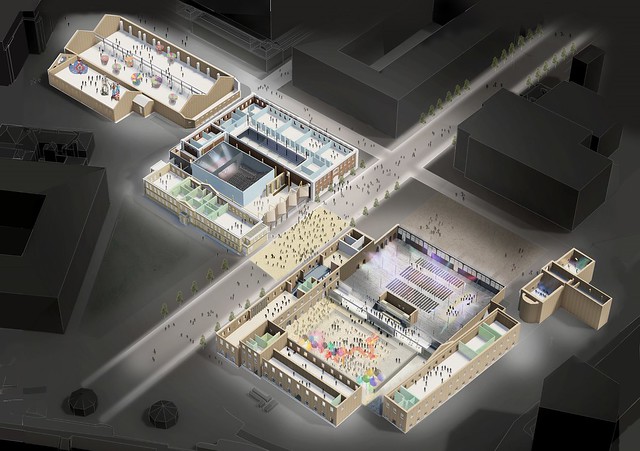 The major investment will bring a series of landmark historic buildings back into use to form the creative district. Bennetts Associates have been appointed to carry out the plan to transform five buildings, including:

The Grade II and Grade II* listed buildings boast historic, architecturally impressive features and expansive square footage, plus unparalleled acoustics found in The Fireworks Factory. This will be renovated into a large scale performance venue with capacity for up to 1200 people.

Work on Woolwich Works is planned across two phases. The first featuring temporary theatres and repair work to three of the historic buildings, to accommodate Punchdrunk, and permanent works to the two remaining buildings. A further phase will complete the long-term upgrade for a permanent performing arts tenant and, for The Laboratory, a future return to the Royal Arsenal for the Greenwich Heritage Trust.

Woolwich Works is managed by an independent trust. Councillors from the Royal Borough of Greenwich sit on the Trust's board.