Exceptional people and organisations from across the borough received awards for their outstanding contributions to the community in Royal Greenwich at special ceremony held in the Woolwich Town Hall.

The worthy winners received their awards from the Leader Cllr Danny Thorpe and the Mayor Cllr Denise Hyland at the tenth annual Civic Awards event. 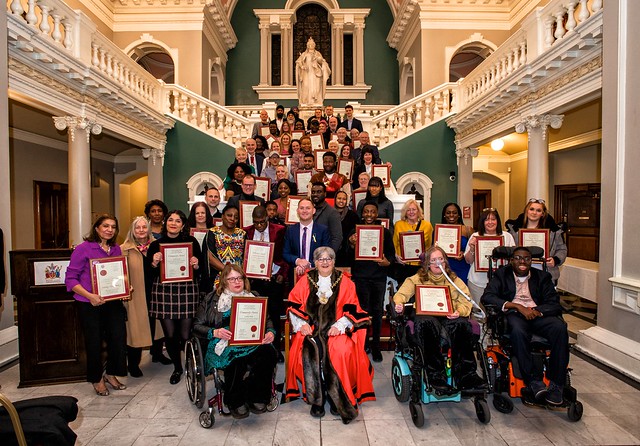 Awards were presented across eleven categories - community, act of courage, young person’s outstanding achievement, volunteer, sporting achievement, lifetime achievement, good neighbour, arts and entertainment, and teacher of the year. There were also special awards from the Leader and Mayor.

"It is fantastic to be back in the Town Hall this year to congratulate all our amazing local heroes in real life. Our awards were set up to recognise the important people in our lives who might otherwise go unnoticed. People who have gone the extra mile, helped out their neighbours or shown exceptional bravery.

“Cuts to local government and rising living and fuel costs mean that now, more than ever, people are having to rely on the goodwill and generosity of charities, volunteers and others. Luckily, as these awards show, Royal Greenwich has no shortage of civic-minded and kind-hearted people who will step in and make a difference to residents’ lives, as we have seen recently with the outpouring of donations for Afghan and Ukrainian refugees.”

"The winners of our Civic Award have shown outstanding community spirit. I am so proud to be able to give them the recognition they so truly deserve. The world can always do with a bit more kindness, selflessness and people who go the extra mile to care for others.

"Our winners have made a huge difference to their communities and as well as making the borough such a wonderful place to live and work. Well done everyone."

See the photos from the night

Find out who won